All Collections
FAQ
Why does Decompression sometimes not appear or overlap with a Habit or Task?

Why does Decompression sometimes not appear or overlap with a Habit or Task?

After a video call, you may find decompression time isn't blocked out or can even overlap with another Reclaim-created event.

Written by Patrick Lightbody
Updated over a week ago

There are two interesting behaviors for how Decompression Time works that can sometimes be a bit confusing at first.

Sometimes you may find that a video call doesn't have decompression time blocked out at all, like so: 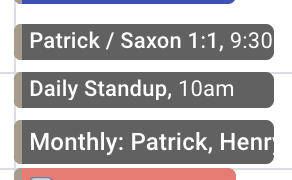 Other times you may see a decompression block overlap with a habit or task event, like so: 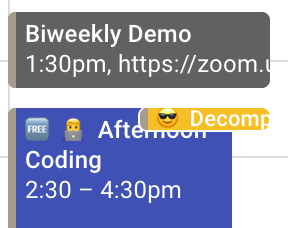 This is the intended behavior.

It helps to understand that the key motivation behind Decompression Time is to prevent back-to-back video calls being booked. It is not necessarily trying to give you a true break, free from any other personal or work commitments -- though sometimes that is what happens.

Now let's consider Scenario 2. In this case, Reclaim is aggressively trying to block out 15 minutes after the Biweekly Demo with the Decompression Time block. But it also recognizes that the user wished for two hours of Afternoon Coding (a Habit). Reclaim has made the decision that the habit still has some flexibility in the schedule, so it is tentatively scheduled as "free", meaning it might move again (see here for more info).

Should those two hours become the last ones of the day, Reclaim will flip Afternoon Coding to "busy" and remove the Decompression Time block. The reason is that Reclaim will recognize that the job of preventing back-to-back video calls has been successful and the time is no longer needed.

But what about true breaks?!

That's a fair question. Currently there is no way to ensure Decompression Time always blocks out time independent from Reclaim Tasks and Habits. But we're always adding new functionality and this type of behavior is something that is under consideration.