All Collections
Tasks
Taking action on your Tasks from Reclaim

Taking action on your Tasks from Reclaim

You can control your Tasks from the Reclaim UI to automate changes to your calendar.

Written by Henry Shapiro
Updated over a week ago

While you have some control of your Tasks directly from your calendar, sometimes it's easier to manage them from Reclaim's UI. Reclaim offers a few key options for automatically moving Task Events around on your calendar, removing Tasks, adding time to Tasks, and marking them as complete.

Starting and stopping Tasks lets you easily move your Task Events up to the current time and automatically truncate Task Events when you want to take a break from the Task, respectively.

Note that Tasks will automatically start themselves when the scheduled time for the Task Event is reached. For example, if you have a Task Event scheduled at 9am, and it's 9:01am, the Task has already started.

To Start a Task, simply click on the button from the Reclaim UI next to your Task:

Once you've started a Task, you'll see the Restart and Stop options appear.

Reclaim will automatically mark your Task Events as complete as time passes them on your calendar. However, you may want to consider the entire Task done ahead of schedule, or cancel it if you decided to abandon the Task.

To mark a Task as done, click the Done button from any Task in the Task UI:

You can add time to your Tasks to extend the total time you want to work on the Task. For example, if you have a Task that you originally thought needed two hours and you decide you actually need three, you would want to add one more hour to the Task.

You'll see a list of options for adding time. If you need to add an amount of time that isn't represented in the dropdown, simply click Edit and set the total duration as you see fit: 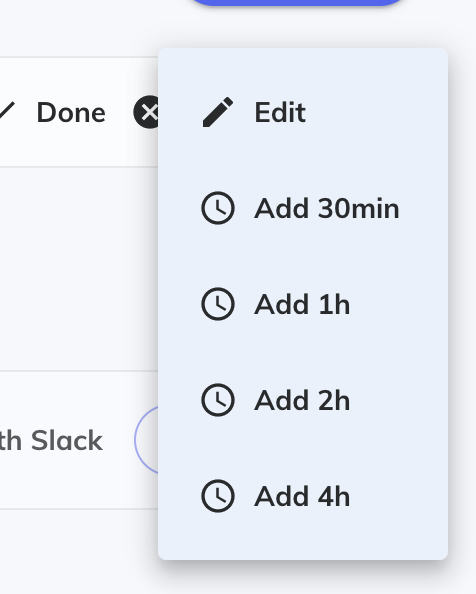 Once you select an option, you'll see a green check appear to confirm that the time is added. The Task now has more time added to it.